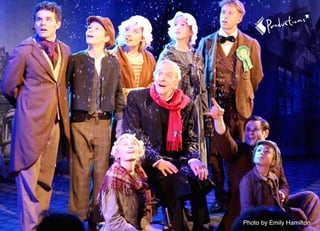 Hi James - first of all, what attracted you to this project?

Over the past few years when we’ve been making the Christmas show for Simply Theatre we’ve had a conversation which has been along the lines of ‘What about A Christmas Carol for next year?’ ‘I’m not sure - it’s such a huge story - can we really do it with a few actors in a studio theatre setting?’ I’m so glad we finally decided to bite the bullet. My favourite adaptations of the novel have to be Scrooged, The Muppet’s Christmas Carol and Alec Guiness in the classic film. I was excited to pay homage to some of the greatest moments from these films as well as discovering moments of my own.

So how did you approach adapting the novel for the stage?

I have always loved reading Dickens. As a theatre maker I am always reading work with half a mind as to how it would look on the stage and Dickens’ characters seem to me to be literally leaping off the page and into the theatre. One of my first jobs was adapting Hard Times as a musical back in 1996 and it was a really happy experience for me. I began the adaptation of A Christmas Carol by reading the novel many times until I felt I really knew the characters. Then I sketched out a scene by scene synopsis of the plot and extracted any dialogue from the book that I thought suited our production. I then wrote the first draft which included my own dialogue but no songs which helped to define how to stage such an epic story with few actors. After having a read through of this rough script and hearing the words out loud I was able to hone the dialogue and write the songs. A working script goes through many drafts before it finally reaches the stage and there are often rewrites that occur even up to opening night.

What were the challenges of bringing the novel to the stage?

Well first of all there’s the flood of colourful characters which inhabit the novel. How could we make them all come to life with a cast of only 5 professional actors and 4 children? Even as I write this I’m aware how challenging it will be for the cast who will be either on the stage or will be frantically running around backstage changing costume or readying props. It requires a virtuosity of craft. There are also (forgive the pun) great expectations that come with adapting a work that is already so popular. There is always the question of whether to include moments that people may have come to expect from various well known adaptations that may not be in the novel. Hopefully we’ve managed a delicate path between honouring expectations and being faithful to the book itself.

What is your favourite moment of the show?

I’m very proud of the way that the Christmas carols weave in and out of the story. I am also delighted by the Celtic inspired dancing that has found its way into the Fezziwig celebrations – and who could fail to be moved by the story of Tiny Tim…. to be honest my favourite moment is always the scene that’s coming next!

The story of A Christmas Carol has remained a popular one for over 150 years. Why do you think that is?

Dickens' A Christmas Carol is one of the great Christmas stories. It speaks about humanity and the love that we share. What better theme could there be for a play at Christmas? I hope that we have done justice to this great story and in the words of Tiny Tim… ‘God Bless Us - Everyone!’

In Part 2 of our interview with Haydn Oakley he tells us about getting his first job, the best...